Primarch Fulgrim of the Emperor’s Children leads his brother Perturabo and the Iron Warriors in an attack upon a mysterious eldar world, in search of ancient xenos weaponry.

THE STORY
Perturabo – master of siegecraft, and the executioner of Olympia. Long has he lived in the shadow of his more favoured primarch brothers, frustrated by the mundane and ignominious duties which regularly fall to his Legion. When Fulgrim offers him the chance to lead an expedition in search of ancient and destructive xenos weaponry, the Iron Warriors and the Emperor’s Children unite and venture deep into the heart of the great star maelstrom that haunts Perturabo’s dreams. Pursued by vengeful survivors from Isstvan V and the revenants of a dead eldar world, they must work quickly if they are to unleash the devastating power of the Angel Exterminatus!

READ IT BECAUSE
It introduces Perturabo, primarch of the Iron Warriors, into the Horus Heresy, and follows Fulgrim on the next step of his extraordinary journey. You won’t believe what happens to him… 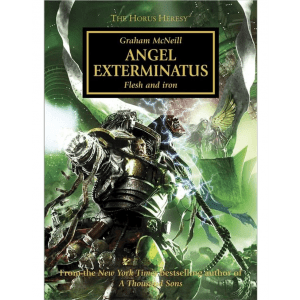 You're viewing: Angel Exterminatus: Horus Heresy Book 23 (Paperback) £6.47
Add to basket
We use cookies on our website to give you the most relevant experience by remembering your preferences and repeat visits. By clicking “Accept”, you consent to the use of ALL the cookies.
Cookie settingsACCEPT
Manage consent