Censured at the Council of Nikea for his flagrant use of sorcery, Magnus the Red and his legion retreat to their homeworld to continue their use of the arcane arts in secret.

READ IT BECAUSE
One of the most tragic tales of the entire Horus Heresy unfolds, as the Thousand Sons are brought low by their relentless quest for knowledge. Magnus is sure that he knows better than the Emperor, but isn’t that what caused Horus to fall as well?

THE STORY
Censured at the Council of Nikea for his flagrant use of sorcery, Magnus the Red and his Thousand Sons Legion retreat to their homeworld of Prospero to continue their use of the arcane arts in secret. But when the ill-fated primarch foresees the treachery of Warmaster Horus and warns the Emperor with the very powers he was forbidden to use, the Master of Mankind dispatches fellow primarch Leman Russ to attack Prospero itself. But Magnus has seen more than the betrayal of Horus and the witnessed revelations will change the fate of his fallen Legion, and its primarch, forever. 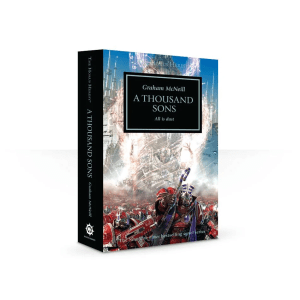 You're viewing: A Thousand Sons: Horus Heresy Book 12 (Paperback) £6.47
Add to basket
We use cookies on our website to give you the most relevant experience by remembering your preferences and repeat visits. By clicking “Accept”, you consent to the use of ALL the cookies.
Cookie settingsACCEPT
Manage consent