Necromunda Hive War Set contains everything needed for two players to fight in the Underhive. This great value set includes the House Escher and House Delaque gangs along with a new updated rulebook to teach you all you need to know!

Hive War Set includes two gangs armed with multiple weapons to bring lots of action to the game. There is also a rulebook within this set which is perfect for those who want to dive straight into games of Necromunda. You will find a variety of scenarios that can be played out to keep you entertained and build your confidence in gameplay.

Necromunda is a tabletop war game revolving around gangs that battle in the Underhive. Located in a world of nothing but factories and mines during the Dark Age of Technology, the gangs are known to fight until death in the undercities where they never witness daylight. Players can gain experience and equipment as they use miniatures to compete within the heavily polluted environment full of violence.

This set is perfect for new players of Necromunda as it contains all the models, rules and accessories needed to begin playing the game. As well as two incredible gangs of miniatures, there is also terrain included so that you can build your own part of Necromunda!

Find a list of the full components for Necromunda Hive War Set below: 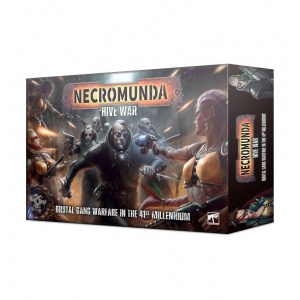 You're viewing: Hive War: Necromunda Starter Set £71.46
Add to basket
We use cookies on our website to give you the most relevant experience by remembering your preferences and repeat visits. By clicking “Accept”, you consent to the use of ALL the cookies.
Cookie settingsACCEPT
Manage consent