To lead a Chapter such as the Black Templars you will need an individual of both supreme willpower and stubbornness, which makes the High Marshal Helbrecht the perfect miniature to include in your army. Driven by the desire to rid the galaxy of all mutants, aliens and heretics, the fury of the High Marshal is matched only by his skills with a blade!

High Marshal is accompanied by two of his attendant thralls, with one carrying his powerful combi-melta while the other is in charge of cleaning his Sword. This kit contains a choice of three different heads both helmeted and unhelmeted, also including an optional impaled Ork at his feet.

The Black Templars have been on the longest Crusade known to the Imperium of Man to prove their loyalty to the Emperor of Mankind. The crusade obsessed Space Marines number in the thousands, they are spread across a number of systems and act as independent units. While they are more independent than other chapters, they all answer to the  High Marshal of the Black Templars, Helbrecht. 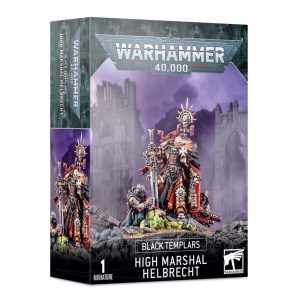 You're viewing: High Marshal Helbrecht (Black Templars) £23.03
Add to basket
We use cookies on our website to give you the most relevant experience by remembering your preferences and repeat visits. By clicking “Accept”, you consent to the use of ALL the cookies.
Cookie settingsACCEPT
Manage consent