After the betrayal at Isstvan, Horus begins his campaign against the Emperor, a galaxy-wide war that can lead only to Terra.

READ IT BECAUSE
The first phase of the over, and the Age of Darkness begins. These tales show the state of the galaxy as war engulfs it and lay hints to what is to come.

THE STORY
After the betrayal at Isstvan, Horus begins his campaign against the Emperor, a galaxy-wide war that can lead only to Terra. But the road to the final confrontation between father and son is a long one – seven years filled with secrecy and silence, plans and foundations being formed across distant stars. An unknown history is about to be unveiled as light is shed on the darkest years of the Horus Heresy, and revelations will surface that will shake the Imperium to its very foundation…

The Isstvan massacres are over and the Age of Darkness begins in nine short stories:
Rules of Engagement by Graham McNeill
Liar’s Due by James Swallow
Forgotten Sons by Nick Kyme
The Last Remembrancer by John French
Rebirth by Chris Wraight
The Face of Treachery by Gav Thorpe
Little Horus by Dan Abnett
The Iron Within by Rob Sanders
Savage Weapons by Aaron Dembski-Bowden 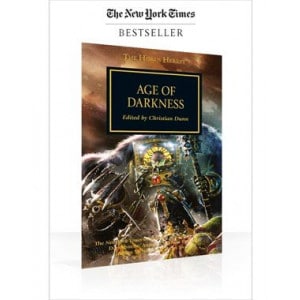 You're viewing: Age Of Darkness: Horus Heresy Book 16 (Paperback) £6.47
Add to basket
We use cookies on our website to give you the most relevant experience by remembering your preferences and repeat visits. By clicking “Accept”, you consent to the use of ALL the cookies.
Cookie settingsACCEPT
Manage consent