Compete against your fellow players in the quest to catch the most fish using penguins! Be careful, if find yourself stranded the ice may just disappear beneath your feet.

Hey That’s My Fish! is a game where 2-4 players aged 8 years and over will compete for the most fish. This award-winning board game requires player to use strategic fish hunting as their penguins grow hungrier for their next meal.

Players will need to race against each other as the Antarctic ice floe will begin to disappear beneath your feet, so you must avoid being stranded to win!

Hey That’s My Fish! is a family fun game that features artwork and tactical play. This quick-play game is incredibly easy-to-learn and full of entertainment as players compete for success. However, watch out for your fellow players as they will attempt to block you from claiming the tasty food supply.

Set up your game by shuffling the hexagonal tiles and placing them face-down. Once that is done, place the tiles face-up in a square shape and alternate the rows going between seven and eight until all tiles have been placed. If players are not happy with the tiles they can switch them to make it more evenly distributed.

On your turn, move your penguin in a straight line to travel over the ice tiles with either one, two or three fish on them. Collect the hex where the penguin started from and create a gap so that penguins are no longer able to cross on future turns.

If a penguin is not able to move, remove it from the game with the owner claiming the tile where the penguin stood. The player with the highest amount of fish wins!

Find the full list of game components for Hey That’s My Fish! below:

Be the first to review “Hey That’s My Fish!” Cancel reply 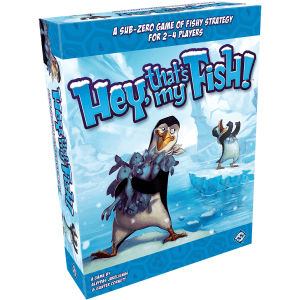 You're viewing: Hey That’s My Fish! £9.95
Add to basket
We use cookies on our website to give you the most relevant experience by remembering your preferences and repeat visits. By clicking “Accept”, you consent to the use of ALL the cookies.
Cookie settingsACCEPT
Manage consent