Heroes Of The Empire (Paperback)

The Empire of Sigmar is under constant threat, and only its great armies and mighty heroes hold the darkness at bay. Kurt Helborg, Ludwig Schwarzhelm, Luthor Huss… these are names that are known across the land. Their adventures are legend, their heroism inspiring. These are their stories.

READ IT BECAUSE
Return to an age of chivalry and nobility, when Knightly orders kept the Empire of Sigmar safe from its many foes, and great heroes led them to war.

DESCRIPTION
The Empire is besieged. Countless enemies batter the border of Sigmar’s mighty nation, but standing against them are brave men and women, united in their defiance and led by true heroes. In the wilderness of Averland, Kurt Helborg, Marshal of the Reiksguard, holds the province together in his iron grip. On the frontiers, Ludwig Schwarzhelm, Emperor’s Champion, must halt the unstoppable onslaught of the Greenskins, while in the Drakwald Forest, the warrior Priest Luthor Huss fights a tide of undead that threatens to sweep away all before it. But more insidious enemies lurk within the shadows. Witch hunters and spies are the only remedy to such poisons, and none are more accomplished than Lukas Eichmann and Pieter Verstohlen, whose individual quests find them on the trail of ruthless murders and labyrinthine conspiracies. Will these heroes triumph, or will the myriad evils of the Old World bring ruin to the hope of humanity? 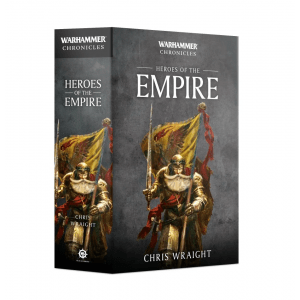 You're viewing: Heroes Of The Empire (Paperback) £12.15
Add to basket
We use cookies on our website to give you the most relevant experience by remembering your preferences and repeat visits. By clicking “Accept”, you consent to the use of ALL the cookies.
Cookie settingsACCEPT
Manage consent