Heavy Intercessors are troops armed with a variety of weaponry including heavy bolt rifles and heavy bolters. They make a great addition to the Space Marines and are excellent for holding objectives!

Intercessor Squad are made up of reliable warriors that can stand firm and lay down fire while holding terrain.  They are standard infantry units of the Primaris Space Marines and are able to adapt to the tasks they are given. Each member comes equipped with a variant of Bolt Rifle due to their long range, a Frag and Krak Grenades. Different chapters also have roles for the Intercessor Squad, for example they are defenders of the Raven Guard and breach-suppressors of the Imperial Fists.

Space Marines are direct descendants of The Emperor of Mankind as well as the last hope for humanity. The fearsome warriors lack in numbers, though each one is worth a thousand men. They are genetically designed superhumans that stand over 7 feet tall with a skeleton as strong as steel. Even the deadliest weapons in the galaxy will struggle to damage their ancient power armour encased in thick plates. Each chapter of the Space Marines have unique strengths and many powerful weapons to choose from to help aid them during battle. 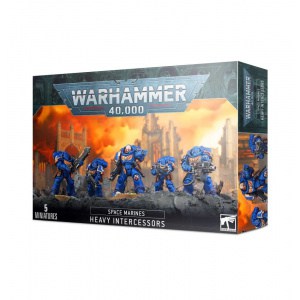 You're viewing: Heavy Intercessors (Primaris Space Marines) £31.36
Add to basket
We use cookies on our website to give you the most relevant experience by remembering your preferences and repeat visits. By clicking “Accept”, you consent to the use of ALL the cookies.
Cookie settingsACCEPT
Manage consent