Find hidden paths to Hogwarts in this Harry Potter Labyrinth maze game! Players will come across famous characters including Harry, Hermione, Hagrid, Ron and more all waiting to be found!

Harry Potter Labyrinth is a maze game where 2-4 players aged 7 years and over will discover hidden paths to Hogwarts. The player that finds the shortest route through the maze will become the winner of the game!

This game is extremely easy to play and exciting for all Harry Potter Fans. The easy to understand instructions means players can begin games straight away and the ever-changing maze means it can be player over and over again.

At the start of the game, players will be dealt cards that feature both witches and wizards from the wizarding world such as Snape and Dumbledore. The starting player will move their path piece around the board in search for treasure before passing the leftover piece to the next player. If they collect all of their wizards and witches, they must return to their starting position and be announced as the winner!

Be the first to review “Harry Potter Labyrinth” Cancel reply 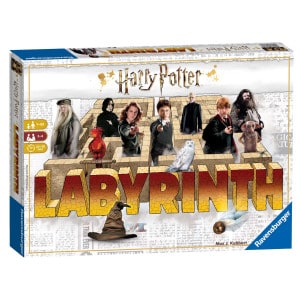 You're viewing: Harry Potter Labyrinth £22.95
Add to basket
We use cookies on our website to give you the most relevant experience by remembering your preferences and repeat visits. By clicking “Accept”, you consent to the use of ALL the cookies.
Cookie settingsACCEPT
Manage consent