Play as Hermione, Ron, Neville, Harry or Luna Lovegood in this Monster Box of Monsters Expansion! There is new challenges and frightening creatures to face and the only chance of defeating them is by working together.

This Monsters Box of Monsters Expansion gives players the opportunity to take on the roles of famous characters Harry, Ron, Neville, Hermione or Luna Lovegood. All players will need to work together to defeat the evil forces, secure the castle, protect iconic locations and make the Wizarding World completely safe!

The expansion features great new elements such as magical creatures and new locations. Luna Lovegood has also been added as a playable hero with her own starting deck and unique ability. If you were a fan of the original game this expansion is exactly what you need!

Harry Potter Hogwarts Battle begins with players adding cards to their deck including magical items, spells and iconic characters. The rest of the cards allow players to fight against villains and regain their health.

Villains will go up against players, only by working together will they have chance to defeat them and secure the castle from all evil forces. 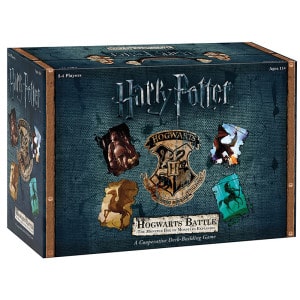 You're viewing: Harry Potter Hogwarts Battle Expansion £21.50
Add to basket
We use cookies on our website to give you the most relevant experience by remembering your preferences and repeat visits. By clicking “Accept”, you consent to the use of ALL the cookies.
Cookie settingsACCEPT
Manage consent