This kit contains the components to assemble Haarken Worldclaimer. The incredibly detailed miniature will bring tactical options to any Chaos Space Marines army and his pose shows the warrior in full assault and striking fear into his opponents!

This kit contains the components to assemble Haarken Worldclaimer. The Chaos Lord and Heretic Astartes Raptor is well known throughout the forces of Chaos as the Herald of the Apolocalypse and the coming reign over the galaxy since the death of the False Emperor. The finely detailed miniature can bring tactical options to any Chaos Space Marines army and his pose shows the warrior in full assault and striking fear into his opponents.

The traitor legions of the Space Marines are the ancient enemy of the Imperium, known for being warped and mutated by the four daemonic Chaos Gods; Khorne, Tzeentch, Slaanesh and Nurgle. Heretic Astartes were created during the Warhammer 40,000 Horus Heresy when nine renegade legions of Space Marines went against the Emperor of mankind in an act that would result in countless deaths and centuries of endless war.

We highly recommend unleashing your creative skills with the incredible Citadel Colour System. Follow the step-by-step guide and discover the huge variety of vibrant paints all designed to suit your Warhammer needs. Once assembled and painted your new unique miniature will be more than ready to join in on the epic battles of Warhammer 40k!

Find the full list of components for the Haarken Worldclaimer below:

Be the first to review “Haarken Worldclaimer, Herald of the Apocalypse” Cancel reply 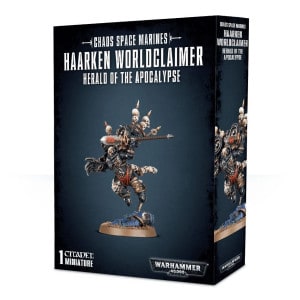 You're viewing: Haarken Worldclaimer, Herald of the Apocalypse £18.70
Add to basket
We use cookies on our website to give you the most relevant experience by remembering your preferences and repeat visits. By clicking “Accept”, you consent to the use of ALL the cookies.
Cookie settingsACCEPT
Manage consent