The Hero of Helsreach is considered to be a spiritual icon for the Space Marines. When Helsreach Hive on Armageddon was taken over by Orks, the High Chaplain held the line when both the walls and roof crashed down around him. Believed to be dead, he managed drag himself out from under the rubble with three divine relics, which his Cenobyte Servitor retinue continue to carry with him into battle.

This multi-part plastic kit contains all the components required to assemble Grimaldus and Retinue. The High Chaplain Grimaldus is known for being a beacon of Imperial faith and his courage leaves many of his brothers believing he is invincible. His will is singular, his energy furious, and his martial skill evident by the broken foes found at his heels. Armed with both a plasma pistol and a artificer crozius, Grimaldus will stride into combat accompanied by servitors who who help inspire the Black Templars to secure the Emperor’s favour!

The Black Templars have been on the longest Imperial Crusade known to the Imperium of Man so they can prove their undying loyalty to the Emperor of Mankind. The crusade obsessed Space Marines number in the thousands, they are spread across a number of systems and act as independent units.

We highly recommend using the Citadel Plastic Glue and Colour System to assemble and paint your miniatures. 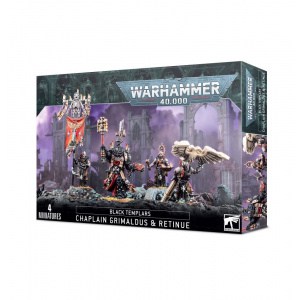 You're viewing: Grimaldus and Retinue (Black Templars) £23.03
Add to basket
We use cookies on our website to give you the most relevant experience by remembering your preferences and repeat visits. By clicking “Accept”, you consent to the use of ALL the cookies.
Cookie settingsACCEPT
Manage consent