The Castellan Crowe wields the Black Blade of Antwyr, a cursed sword capable of striking down the most deadly of foes. You can assemble this miniature with or without a helmet!

The Castellan Crowe is a great warrior and a potent HQ choice for your Grey Knight force. Crowe is able to seek out and strike down the enemy using the cursed Black Blade of Antwyr, allowing him to fight even with wounds that would destroy another Space Marine. Castellan Garran Crowe is known for being the Champion of the Order of Purifiers and is the keeper of the Black Blade of Antwyr. The daemon sword whispers both promises and threats to those who wield it,  a huge temptation against which Castellan Crowe proves himself by forgoing the blade’s dark powers to favour his own  combat prowess!

Warhammer 40k Grey Knights were created by the Emperor to become humanity’s greatest weapon against chaos. They are a Space Marines Chapter specialising in hunting Chaos Daemons after a harsh selection process of endless training. This mysterious and feared chapter are well known for their martial prowess and relentlessness in hunting down all daemons. Though they often stand few in number, each of these warriors can face down dozens of daemons and heretics with ease.

We highly recommend using the Citadel Plastic Glue and Colour System to assemble and paint your miniature!

Be the first to review “Castellan Crowe” Cancel reply 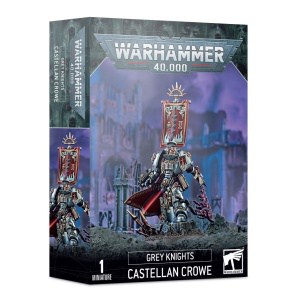 You're viewing: Castellan Crowe £21.84
Add to basket
We use cookies on our website to give you the most relevant experience by remembering your preferences and repeat visits. By clicking “Accept”, you consent to the use of ALL the cookies.
Cookie settingsACCEPT
Manage consent