The Necron Ghost Ark is a large model with an imposing presence in any Necron army. The Ghost Ark also contains formidable weaponry with five gauss flayers on each side.

This multi-part plastic boxed set contains 168 components, two small flying stems, one large flying base and two Necron transfer sheets with which to build one Necron Doomsday Ark or a Necron Ghost Ark.

The Doomsday Ark is a technological wonder, easily eclipsing the primitive energy weapons of the Imperium. Even fired at low power the doomsday cannon is ferociously destructive.

The Doomsday Ark is a large model with an imposing presence in any Necron collection. It features several immense engines that sit at the rear of the model, and displays detailing such as orbs and iconic dynastic glyphs. A Necron Lord sits atop the Doomsday Ark in a commanding position, overseeing rows of rib-like structures, while a massive Doomsday Cannon hangs menacingly underneath.

Ghost Arks are often pressed into service as conventional transport vehicles, conveying reinforcements to some vital area of the battlefield, or allowing Necron forces to attack from an unexpected quarter.

This kit is unpainted and requires assembly – we recommend using Citadel Plastic Glue and Citadel Paints. 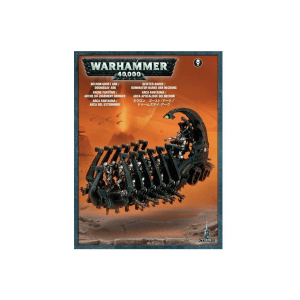