From a deadly trek across a fallen world to the defence of a holy city alongside Saint Sabbat herself, this second Gaunt’s Ghosts collection contains four novels of classic Astra Militarum action.

READ IT BECAUSE
It’s in these stories that the Gaunt’s Ghosts series becomes a true classic. Story arcs take shape, characters rise and fall and shock abound.

THE STORY
In the blood-soaked Sabbat Worlds Crusade, the massed ranks of the Imperium battle the dark forces of Chaos for dominion. At the forefront of this conflict are the Imperial Guard – untold numbers of ordinary soldiers fighting to preserve the Emperor’s holy realm. Colonel-Commissar Ibram Gaunt and the men of the Tanith First and Only are at the heart of this struggle. Forced to flee their planet before it was destroyed by Chaos, their specialist scouting role has earned them the nickname ‘Ghosts’, along with any dangerous mission their commanders choose to throw at them. Follow Gaunt’s epic adventures as he and his men storm into battle with their war cry: ‘Men of Tanith, do you want to live forever?’

Be the first to review “Gaunt’s Ghosts: The Saint Omnibus (Paperback)” Cancel reply 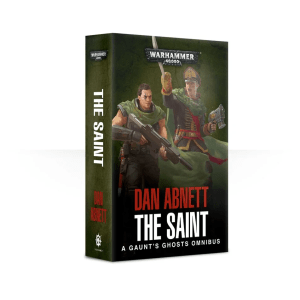 You're viewing: Gaunt’s Ghosts: The Saint Omnibus (Paperback) £12.15
Add to basket
We use cookies on our website to give you the most relevant experience by remembering your preferences and repeat visits. By clicking “Accept”, you consent to the use of ALL the cookies.
Cookie settingsACCEPT
Manage consent