Bring witch hunters Galen and Doralia to your Warhammer age of Sigmar armies. The dad and daughter combo fight alongside the Grand Alliance of Order and bring amazingly unique skills to conquer the enemy!

Galen and Doralia are a father and daughter combination who both have unique fighting styles. Galen will fearlessly plunge into dangerous close combat while Doralia targets the enemy from range.

Galen ven Denst is a veteran witch hunter who is known for burning hundreds of witches and heretics at the stake. He can slay his opponents using a holy pistol and rune-etched broadsword that is capable of banishing endless spells.

Doralia ven Denst is also a witch hunter and fights alongside her father with her trusty crossbow. With bolts full of murderous power, her accuracy is to be feared as she can slay her opponents from a distance.

This kit contains the components to assemble Galen ven Denst and Doralia ven Denst. Galen can be armed with a pistol and torch or a sword and pistol. Doralia can be assembled with or without her witch hunter’s hat. 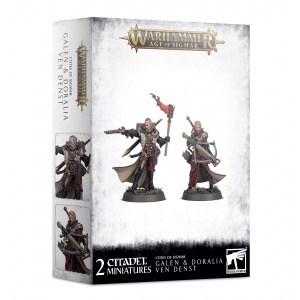 You're viewing: Galen and Doralia Ven Denst (Cities of Sigmar) £25.01
Add to basket
We use cookies on our website to give you the most relevant experience by remembering your preferences and repeat visits. By clicking “Accept”, you consent to the use of ALL the cookies.
Cookie settingsACCEPT
Manage consent