The Flayed Ones are Necrons who have become victims of the Flayer Virus, a process which has drove them completely insane. They have a powerful craving for blood and will wear the flesh and body parts of their opponents. Even the Necrons species fear the Flayed ones as they don’t want to catch the virus. All Necrons that do get infected will be exiled, unless they are able to escape to the Flayer Dimension to join their kind. Strategy is not necessary as they follow only their smell of blood, they will stalk for as long as it takes to catch their prey in a moment of weakness using only their claws.

Necrons are a xenos species surrounded by mystery as they begin to awaken from their dormant tomb-worlds. The humanoid, robotic skeletal warrior species are former servants of the Star Gods that have now become ruthless killing machines determined to control the galaxy once more. They all have one purpose, to restore their ancient ruling and reclaim their lands. If damage to a Necron does occur they ‘phase out’ and get taken to safety to repair by a teleportation beam. However, if this fails they are consumed by a emerald light. The science behind the Necrons remains unknown as they refuse to share any secrets with weaker species.

Unleash your creativity and use the Citadel Colour System to bring the gruesome Flayed Ones to life. Choose from a huge range of vibrant water-based colours which have all been designed and developed specifically for Warhammer painting. Decide on a painting method and follow the steps so that you can begin future battles of Warhammer 40k with spectacular miniatures!

This kit provides enough components to assemble five Flayed Ones to use in battles of Warhammer 40,000!

Be the first to review “Flayed Ones (Necrons)” Cancel reply 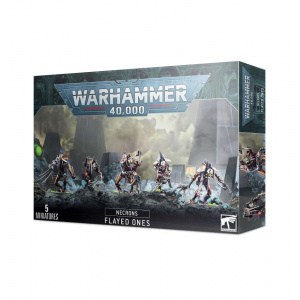 You're viewing: Flayed Ones (Necrons) £25.32
Add to basket
We use cookies on our website to give you the most relevant experience by remembering your preferences and repeat visits. By clicking “Accept”, you consent to the use of ALL the cookies.
Cookie settingsACCEPT
Manage consent