Book 2 in the Farsight series

The T’au Empire has long been plagued by the brutal orks – and Commander Farsight will see them destroyed. As his obsessive war against the greenskins escalates, other forces are at work, driving Farsight to an encounter that will change his view of the universe, the T’au Empire… and himself.

THE STORY
High Commander Farsight, fresh from his victory against the Imperium over the Damocles Gulf, looks to his borders and finds his old enemies – the savage and warlike orks – assailing his worlds and threatening to ravage the heart of the T’au Empire. Farsight’s obsessive crusade will see him locked in an escalating conflict with the greenskins, and he will stop at nothing until their infestation is purged. In the background, foul forces are at work, however – forces that will do whatever they can to see the military genius of Farsight fall on the daemon-haunted world of Arthas Moloch. Can Farsight stand in the face of new truths, and will the T’au Empire stand with him?

READ IT BECAUSE
Discover the real story behind the defining moment of Commander Farsight’s life – and witness his struggles as he is torn between the Greater Good and the hideous truth about the nature of the galaxy.

Be the first to review “Farsight: Empire Of Lies (Paperback)” Cancel reply 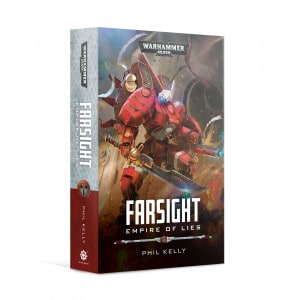