Fresh from his victory on Arkunasha, the young Commander Farsight leads a crusade to reclaim colonies lost to mankind’s Imperium. But stiff resistance will test him to his limits, and beyond.

READ IT BECAUSE
Phil Kelly continues his look at the life of Commander Farsight with his first campaign against the full might of the Imperium, and shows how the T’au Empire’s technological superiority fares against Imperial grit.

THE STORY
The t’au are a mysterious alien race, diametrically opposed to the Imperium of Man in every possible way – in their mastery of technology, methods of warfare and social structure. Yet in galactic terms they are a young race, and naive when it comes to the manipulations of Chaos. When promising young Commander Farsight is promoted to lead a crusade across the Damocles Gulf to reclaim the T’au Empire’s lost colonies from mankind, the mood is one of optimism. With their mighty fleet, and superior weapons and machines, how can their endeavour possibly fail? However, despite a parade of early successes, Commander Farsight soon faces enemies he wasn’t anticipating, and finds not only his courage but also his soul tested to the very limit.

Be the first to review “Farsight: Crisis Of Faith (Paperback)” Cancel reply 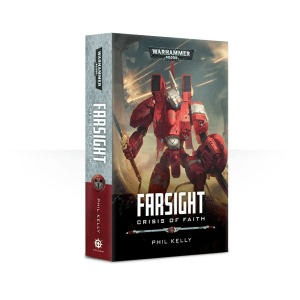 You're viewing: Farsight: Crisis Of Faith (Paperback) £7.28
Add to basket
We use cookies on our website to give you the most relevant experience by remembering your preferences and repeat visits. By clicking “Accept”, you consent to the use of ALL the cookies.
Cookie settingsACCEPT
Manage consent