Fall Of The Necromancer (Hardback)

This Fall Of The Necromancer 72-page hardback supplement features the story of Sauron the Necromancer, Narrative Play Scenarios, Painting Guides and so much more. Many years since Sauron was cast from the Middle-earth at the Battle of the Last Alliance, he has returned as a Necromancer ready to corrupt the realm once more. By building Dol Guldur, his influence soon spread throughout the Greenwood and it slowly began to turn into a dark and cursed place. That was until Gandalf and the White Council decided to shine a light on Sauron’s ambition.

This hardback for the Middle-earth Strategy Battle Game reveals the history of Sauron the Necromancer and his return. It also features background information on the lands surrounding Dol Guldur, along with multiple narrative play Scenarios and a campaign system to help link them all together. Also including modelling tips and four brand new Legendary Legions which represent iconic forces from both sides of the conflict!

Fall Of The Necromancer Contents 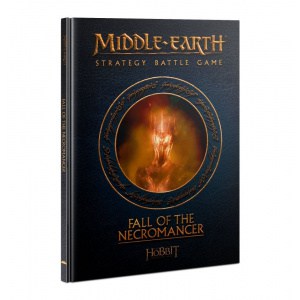 You're viewing: Fall Of The Necromancer (Hardback) £23.82
Add to basket
We use cookies on our website to give you the most relevant experience by remembering your preferences and repeat visits. By clicking “Accept”, you consent to the use of ALL the cookies.
Cookie settingsACCEPT
Manage consent