Lead your Chaos Space Marines army into battle with the Apothecary Fabius Bile. Use gene manipulation to improve your warriors and get support from the Surgeon Acolyte to create more experiments!

This multipart plastic kit contains the components to assemble this Clonefather,  Ancestor, Spider miniature known as Fabius Bile. He has laboured under multiple epithets throughout his long and wicked life, but none really conveyed the evil of this heretic crypto-scientist. A twister of both flesh and nightmares, Fabius Bile is one of the most abominable heretics to damage the Emperor’s realm. He is a Chaos pace Marine Apothecary, who repeatedly attempts to use his knowledge of both genetic engineering and cloning to create many superhuman beings completely under his control. His ultimate goal is to exceed the Emperors scientific achievements in creating the primarchs in the hope of creating his own perfect Human form.

In command of Fabius, you will be able to unleash gene-spliced horrors upon a vulnerable galaxy, bringing the enemies to their knees. Bile is very capable of taking care of himself as he carries the deadly Rod of Torment. He is also accompanied by the Surgeon Acolyte, who has a role of assisting him in his work. This pair make a great painting project and also make an excellent addition to any Chaos Space Marines army.

We highly recommend using the Citadel Plastic Glue and Paints to assemble and create these two miniatures. 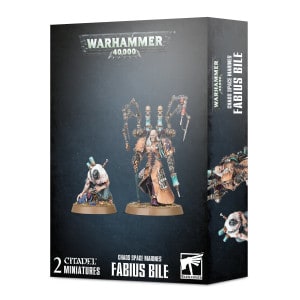 You're viewing: Fabius Bile (Chaos Space Marines) £20.25
Add to basket
We use cookies on our website to give you the most relevant experience by remembering your preferences and repeat visits. By clicking “Accept”, you consent to the use of ALL the cookies.
Cookie settingsACCEPT
Manage consent