Become a leader of critters and begin building your very own village. Players have just one year to complete their villages and earn the highest amount of points!

Everdell is a fantasy board game where 1-4 players aged 13 years or over will use resources and build a village consisting of critters and constructions. The worker placement game involves the progression of players as they send out workers by playing cards, drawing cards and claiming new resources within the valley of Everdell.

The woodland game is brought to life using Andrew Bosley’s stunning art, with each and every component beautifully crafted. There is also a cardboard tree that towers over the villages and boosts the game with unique character and a lovely visual appeal.

During their turn a player will take one of three actions.

The first action is Place a Worker, each player will use their worker pieces. to perform various actions. This develops gameplay as movement includes gathering resources, special actions and drawing cards.

Second action is Play a Card, players are building their city and need to generate resources. Cards reveal numerous strategies and will earn resources, score points and grant abilities.

Third action is Prepare for the next Season, this is where workers will be returned to the supply and new workers will be added. The game takes place from one winter to the next, where the player with the most points becomes the winner!

Find the full list of game components for Everdell below:

Be the first to review “Everdell” Cancel reply 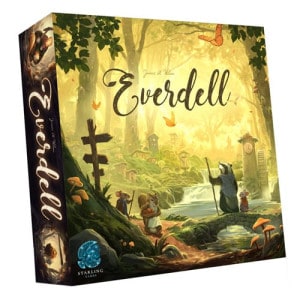 You're viewing: Everdell £48.95
Add to basket
We use cookies on our website to give you the most relevant experience by remembering your preferences and repeat visits. By clicking “Accept”, you consent to the use of ALL the cookies.
Cookie settingsACCEPT
Manage consent