Introduce six new reckless fighters to your Escher Gang with this set! Featuring Death Maidens, Wyld Runners, Phelynx and their evil pets which can all be personalised using a range of different options.

Expand your Escher Gangs by introducing six new fighters and their pets. Representing both ends of the Escher lifecycle are the Death Maidens and the Wyld Runners. All the Escher adolescents will grow up learning everything they need to know, once they come of age they have the choice of joining the clan or becoming reckless explorers known as the Wyld Runners. On the other hand, Death Maidens are the fallen warriors who rise from their graves with the aim to seek revenge.

Warhammer 40k Necromunda is a tabletop wargame consisting of brutal gangs who battle within the crime-ridden Underhive. Players will gain new members, experience and equipment as they fight their way to success in heavily polluted environments full of nothing but violence!

Find the rules to play using Escher Death Maidens in the House of Blades. 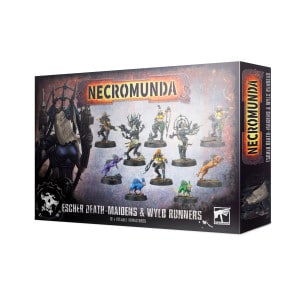 You're viewing: Escher Death Maidens & Wyld Runners £20.64
Add to basket
We use cookies on our website to give you the most relevant experience by remembering your preferences and repeat visits. By clicking “Accept”, you consent to the use of ALL the cookies.
Cookie settingsACCEPT
Manage consent