Mystery at the Stargazer’s Manor: Escape the Room

Discover the mystery of the missing astronomer’s manor in this edition of Escape the Room! Players must find hidden objects and uncover clues to solve the mystery and escape.

Mystery at Stargazer’s Manor is an escape room game where 3-8 players aged 10 years and over will need to uncover clues and find hidden objects in order to get out!

It’s 1869 and the town’s well known astronomer has been missing since the unfortunate passing of his wife. Strange things have been occurring at his manor, including loud and noises, unpleasant smells, and smoke rising from the observatory. Your mission is to the mystery at the Stargazer’s Manor and escape by discovering clues!

This is a great game to play with family and friends as you can spend the evening unlocking clues, solving puzzles and revealing the mystery of the Manor. What was once a digital adventure has turned into real life events, but this version allows you to bring the excitement to your very own home.

Mystery at the Stargazer’s Manor Gameplay

The objective of the game is to work with fellow players and to solve puzzles, unlock clues and solve the Mystery of the Stargazer’s Manor.

Players have lots to find answers to, including the unfamiliar noises, smoke and unpleasant smells that have taken place since the death of the astronomers wife.

Will you solve the mystery before time runs out?

Find the full list of components for Escape the Room below: 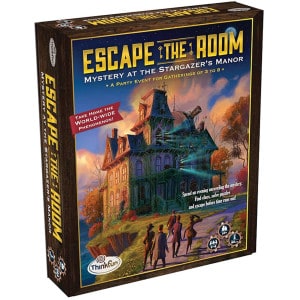 You're viewing: Mystery at the Stargazer’s Manor: Escape the Room £12.94
Add to basket
We use cookies on our website to give you the most relevant experience by remembering your preferences and repeat visits. By clicking “Accept”, you consent to the use of ALL the cookies.
Cookie settingsACCEPT
Manage consent