The Emperor’s Champion is an iconic hero who is a HQ choice for the Black Templars! This set includes a Black Sword, Bolt Pistol and more.

The Emperor’s Champion is a warrior forming part of the Black Templars chapter. The Champion will seek out the enemies generals and heroes before slaying them with blows from his very own Black Sword. The implacable warrior is able to shrug off countless wounds and strike down inumerous foes in return. His wargear is considered holy and is held in the Reclusiam of the Black Templars, should the Champion somehow fall, crusades will be launched to recover this sacred armament.

During the eve of battle, a Black Templar can receive visions from the Emperor which commands them to battle against the enemy’s strongest fighters in just a single combat. These blessed Space Marines will be granted the Armour of Faith as well as the Black Sword and will immediately go and commit tremendous acts of violence!

We highly recommend using both the Citadel Plastic Glue and Colour System to make your new miniatures entirely unique. Discover the impressive range of Citadel paints that have all been designed specifically for Warhammer painting and bring your new miniature to life. Simply follow the steps provided and pick out your favourite Citadel paints. Once primed and ready, introduce the Champion to the endless games of Warhammer 40k! 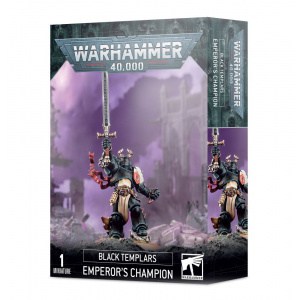 You're viewing: Emperor’s Champion (Black Templars) £18.66
Add to basket
We use cookies on our website to give you the most relevant experience by remembering your preferences and repeat visits. By clicking “Accept”, you consent to the use of ALL the cookies.
Cookie settingsACCEPT
Manage consent