Across the globe, ancient evil is stirring. Now, you and your trusted circle of colleagues must travel around the world, working against all odds to hold back the approaching horror. Foul monsters, brutal encounters, and obscure mysteries will take you to your limit and beyond. The end draws near! Do you have the courage to prevent global destruction?

Eldritch Horror is a cooperative game of terror and adventure in which one to eight players take the roles of globetrotting investigators working to solve mysteries, gather clues, and protect the world from an Ancient One Ã¢â‚¬â€œ that is, an elder being intent on destroying our world. Each Ancient One comes with its own unique decks of Mystery and Research cards, which draw you deeper into the lore surrounding each loathsome creature. Discover the true name of Azathoth or battle Cthulhu on the high seas.

With terror spreading across the globe, you and your fellow investigators will venture to the far corners of the world. From the snowcapped peaks of the Himalayas to the bustling streets of San Francisco, you and your group of investigators will travel to the world’s major cities, its most remote wildernesses, and everywhere in-between to prevent an impending global catastropheÃ¢â‚¬Â¦ the awakening of an Ancient One whose arrival will cast the world into eternal darkness.

Every element ofÃ‚Â Eldritch HorrorÃ‚Â is designed to immerse you in its narrative theme of world-spanning horror and adventure. As the game unfolds, the narrative woven throughout each and every mechanic intensifies the pressure.

Even the components ofÃ‚Â Eldritch HorrorÃ‚Â add to the story and are designed to further immerse you in this epic, world-spanning adventure. From character sheets that resemble well-worn passports, tokens made to look like train and ocean liner tickets, and a board that displays a yellowed map of the world,Ã‚Â Eldritch HorrorÃ‚Â weaves an engaging tale of a global odyssey to save civilization.

Eldritch HorrorÃ‚Â includes several features designed to ensure a unique experience each and every time you play. With over three-hundred cards, you can be assured of amazing variety in encounters, Mythos effects, and more. And since each Ancient One has dedicated decks of Mystery and Research cards, you’ll not only select an Ancient One, you’ll select an entire style of play.

Further contributing to the game’s replayability, twelve intrepid investigators stand ready to defend the world from a threat that only they truly understand. Take the role of expedition leader Leo Anderson, influential actress Lola Hayes, or any of the included heroes. Since each investigator offers his or her own unique skills, starting assets, and approaches to winning, you’re sure to find a favorite persona for saving the world.

Venture across the high seas or deep into the wild to battle monsters, uncover ancient secrets, and gather dark knowledge as you work to prevent the coming catastrophe. The eldritch horror is here. The fate of our world is in your hands. Your journey begins now. Are you ready? 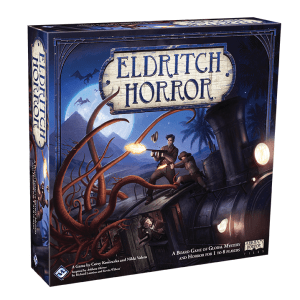 You're viewing: Eldritch Horror £41.70
Add to basket
We use cookies on our website to give you the most relevant experience by remembering your preferences and repeat visits. By clicking “Accept”, you consent to the use of ALL the cookies.
Cookie settingsACCEPT
Manage consent