Compete using the first Idonteth Deepkin warband in Warhammer Underworlds with this incredible Elathain’s Soulraid kit. Included is also 62 playable cards and the option to play in Warhammer Age of Sigmar with a free downloadable warscroll!

Elathain’s Soulraid are a well skilled warband that includes Elathain, Fuirann, Tammael, Duinclaw and Spinefin. The first ever Idoneth Deepkin warband feature multiple sea-based items such as shells, wrecks and Duinclaw being a giant crab. They all share similar abilities such as becoming inspired during the second round of the game. This set also includes fighter and playable cards for the warband, you can also fight with Elathain’s Soulraid in Warhammer Age of Sigmar by downloading the free warscroll.

Warhammer Underworlds is a miniature competitive game consisting of a variety of warbands. Set in the Warhammer Age of Sigmar universe, players will have to compete using their miniatures and battle within the Mortal Realms. Watch your fighters grow in skill as 2-4 players go up against each other to see which warband become victorious. Each and every fighter in Warhammer Underworlds comes with their own unique fighter card. Here you will find information regarding wounds, attacks, defence and any extra abilities.

Decide between classic and contrast painting methods and use your creative skills to bring your miniatures to life. There is a huge range of colours to choose from so your miniatures will be completely unique. Once assembled and painted, your incredible Elathain’s Soulraid warband will be ready for battles of Warhammer Underworlds and Warhammer Age of Sigmar! 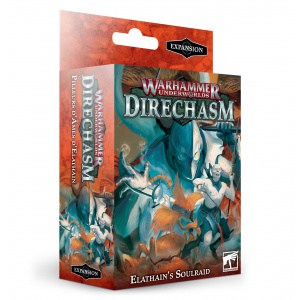 You're viewing: Elathain’s Soulraid (Warhammer Underworlds) £17.50
Add to basket
We use cookies on our website to give you the most relevant experience by remembering your preferences and repeat visits. By clicking “Accept”, you consent to the use of ALL the cookies.
Cookie settingsACCEPT
Manage consent