Book 2 in the Eisenhorn series

READ IT BECAUSE
Eisenhorn’s back in a classic thriller. What could be cooler than an inquisitor on the run for a crime he didn’t commit? Not much. How much is Eisenhorn willing to compromise himself – and his closest friends – and risk his soul for a chance to clear his name?

THE STORY
A century after his recovery of the alien Necroteuch, Gregor Eisenhorn is one of the Imperial Inquisition’s most celebrated agents. But when a face from his past returns to haunt him, and he is implicated in a great tragedy that devastates the world of Thracian Primaris, Eisenhorn’s universe crumbles around him. The daemon Cherubael is back, and seeks to bring the inquisitor to ruin – either by his death, or by turning him to the service of the Dark Gods.

Be the first to review “Eisenhorn: Malleus (Paperback)” Cancel reply 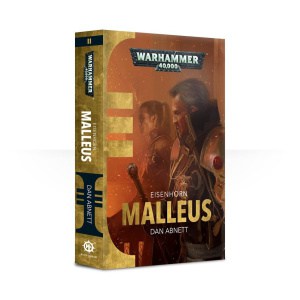 You're viewing: Eisenhorn: Malleus (Paperback) £6.00
Add to basket
We use cookies on our website to give you the most relevant experience by remembering your preferences and repeat visits. By clicking “Accept”, you consent to the use of ALL the cookies.
Cookie settingsACCEPT
Manage consent