Book 3 in the Eisenhorn series

Inquisitor Eisenhorn returns, and this time he’s on the edge of treachery. How far can he go before he crosses the line and becomes what he is sworn to hunt?

READ IT BECAUSE
Eisenhorn seeks the truth behind a string of disappearances centred around a travelling carnival and a pictographer whose images are more than they seem. Inquisitor Eisenhorn has saved worlds and beaten bad guys galore, in short, he’s a hero. But he’s also done some dodgy things, and they’re coming back to haunt him… His struggle to justify his actions (especially the daemon summoning) make this an incredibly compelling read and rounds off the trilogy perfectly.

THE STORY
Hunted by his former allies as a radical and enemy of the Imperium, Inquisitor Gregor Eisenhorn must fight to prove that he remains loyal as he tracks down a dangerous heretic whom the Inquisition believes dead, the dread former Inquisitor Quixos. As he grows more desperate for victory, Eisenhorn uses ever darker means to achieve his goals, but how far can he go using the weapons of the enemy until he becomes that very enemy, and no different to the traitor he hunts? The eBook and paperback editions also include the short story Backcloth for a Crown Additional.

Be the first to review “Eisenhorn: Hereticus (Paperback)” Cancel reply 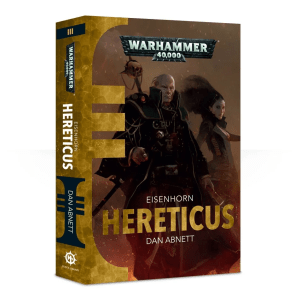 You're viewing: Eisenhorn: Hereticus (Paperback) £7.28
Add to basket
We use cookies on our website to give you the most relevant experience by remembering your preferences and repeat visits. By clicking “Accept”, you consent to the use of ALL the cookies.
Cookie settingsACCEPT
Manage consent