Dune: The Board Game

Control the forces of noble families and religious orders as you rewrite the script of one of the best science fiction books! Here is your chance to create the spectacular world of Frank Herbert’s novel Dune!

Dune is a game where 2-6 players aged 14 years and over will compete for control of planets. Play the roles of characters and their forces from the incredible Dune Novel by Frank Herbert with this strategy board game!

The race to occupy the  amount of strongholds begins now. Whether you play on your own or work with an alliance strategies are a must. You will need to decide when to bring in troops, where they should go, how to collect that Spice and win battles.

Decide from six factions that all feature unique strengths and weakness. Enjoy the art and design throughout the game, including the components which are great in delivering a solid play through.

However, make sure to not attract the deadly Sandworm attacks or have your plans destroyed by passing storms!

Become a leader and choose from one of six great factions. All players are competing to gain control of a valuable resource known as melange. However, this mysterious spice is found at a great cost on planet Dune.

The addictive drug must be ingested so that the Guild Steersman will continue to see visions of the future and find a path through the hyperspace.

Find the full list of game components for Dune below:

Be the first to review “Dune: The Board Game” Cancel reply 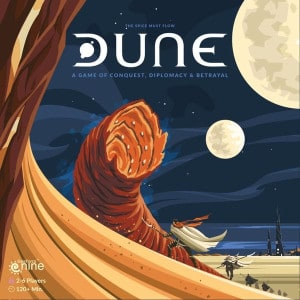 You're viewing: Dune: The Board Game £31.75
Add to basket
We use cookies on our website to give you the most relevant experience by remembering your preferences and repeat visits. By clicking “Accept”, you consent to the use of ALL the cookies.
Cookie settingsACCEPT
Manage consent