Drukhari Combat Patrol provides an ancient and highly advanced alien race that consider themselves superior. Above all, the intelligent race take pleasure in causing physical and emotional pain to others and are physically strong with a thirst for torment.

Kabalite Warriors are armed with weapons to inflict agony on other races with their high speed attacks. In addition, they benefit from armour that allows for speed and agility and they often have bodysuits fitted with hooks to sharpen their senses so they fight with murderous intent.

The Archon is the master and carries a blade and pistol with a cloak of skin to display the horror he can cause. Considerably the most ruthless and powerful member of a Dark Eldar Kabal, the Archon suffers frequent assassination attempts due to the power they hold.

The Incubus is a fiersome warrior that act as personal bodyguards outside of combat. The incubi are heavily armoured with lethal blades, their goal is simply to kill.

The Ravager gun ship is armed with three powerful weapons that can destroy enemy tanks and infrantry alike. They are so fast and powerful they can obliterate the enemy in a single pass before they even know what has hit them!

Raiders are favourite forms of transports because they are lightweight and able to travel at speed. Equipped with sword-sharp fins and heavy weapons to help attack.

The Drukhari Combat Patrol makes a perfect starter army or you can collect them to expand Warhammer 40k armies you currently own.

Drukhari Combat Patrol provides you with 18 Drukhari miniatures that you will need to assemble and paint. Components are supplied with Citadel bases and a Drukhari transfer sheet:

Paint your miniatures using either classic or contrast painting methods with the Citadel Colour range and bring your miniatures to life. In addition, our Colour shades and paints recommended for Drukhari Combat Patrol are:

Be the first to review “Drukhari Combat Patrol” Cancel reply 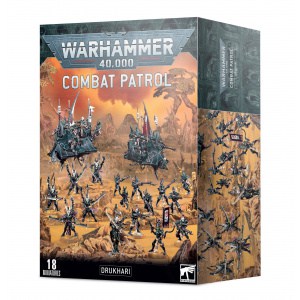 You're viewing: Drukhari Combat Patrol £67.84
Add to basket
We use cookies on our website to give you the most relevant experience by remembering your preferences and repeat visits. By clicking “Accept”, you consent to the use of ALL the cookies.
Cookie settingsACCEPT
Manage consent