Use your imagination in the story telling game Dixit! In this family party game its every player for themselves, so get thinking as only one of you can win!

Dixit is made up of colourful and creative cards that look quite strange. The aim of the game is for 3-6 players aged 8 and over to pick a storyteller to describe these cards in as much detail as they choose. The remaining players will then use the cards they have and choose the one they believe fits the description. Be confident in your choosing, because the card you choose and vote for will determine which player gets points.

In Dixit either the first player to 30 points, or the player with the highest points when the deck has run out becomes the winner!

Be the first to review “Dixit” Cancel reply 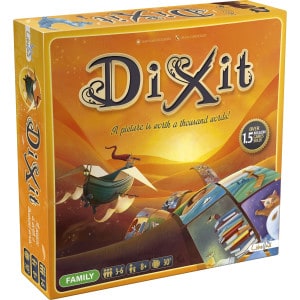 You're viewing: Dixit £20.00
Add to basket
We use cookies on our website to give you the most relevant experience by remembering your preferences and repeat visits. By clicking “Accept”, you consent to the use of ALL the cookies.
Cookie settingsACCEPT
Manage consent