Take control of famous Disney villains in Disney’s Villainous: Evil Comes Prepared. Players will use special abilities from characters including Scar from The Lion King, Yzma from The Emperor’s New Groove and Ratigan from The Great Mouse Detective!

Disney’s Villainous: Evil Comes Prepared is a board game where 2-3 players aged 10 years or over will take control of the famous Disney villains. Control the actions of characters including Ratigan from The Great Mouse Detective, Scar from The Lion King and Yzma from The Emperor’s New Groove!

Each player will have their own deck of cards, fate deck, unique player board and 3D villain character.

This game is playable on it’s own but can also be added to the base game and Wicked to the Core for a character face off!

Evil Comes Prepared plays in turns where the active player will move their character to different locations. Players will also any actions visible on that space and collecting more cards. Cards are necessary to fulfil unique win conditions.

Some actions will allows you to pick out another player, draw two cards from their fate deck and then play one card on their  board. Fate decks contains heroes, effects, and items from that villain’s movie, and allow other players to trick that villain.

Find the full list of game components for Evil Comes Prepared below: 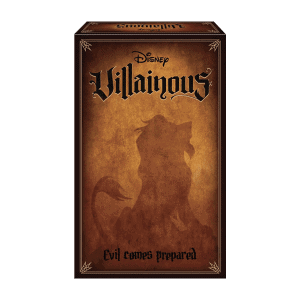 You're viewing: Evil Comes Prepared: Disney Villainous £24.20
Add to basket
We use cookies on our website to give you the most relevant experience by remembering your preferences and repeat visits. By clicking “Accept”, you consent to the use of ALL the cookies.
Cookie settingsACCEPT
Manage consent