Dexcessa The Talon Of Slaanesh

Dexcessa, The Talon of Slaanesh will command the Hedonite Slaanesh armies and get involved with close combat to become increasingly dangerous. This kit can also be assembled as twin Synessa, the Voice of Slaanesh.

Dexcessa commands the Hedonites of Slaanesh using twin aspects of Slaanesh’s newborn. With the same lust for battle, the Talon will grow more dangerous during close combat and will use sharp claws to inflict death upon opponents. The Daemon can weave effortlessly through the battlefield, only stopping to behead the enemy.

Synessa, the Voice of Slaanesh takes great pleasure in manipulating the mind rather than physical harm. The whispers of the powerful wizard can reach across the entire battlefield and reduce the foes to ash.

Hedonites of Slaanesh worship the God of excess and secrets as part of the Grand Alliance of Chaos. The absence of their dark prince resulted in a split of warbands known as Invaders, Pretenders and Seekers. The Invaders do not seek their God, instead they continue his violent work which is usually led by a Keeper of Secrets. Pretenders focus on gathering a powerful force to help them ascend and become the next God of excess. On the other hand, Seekers are determined to travel the Mortal Realms in search for their lost dark prince and will torture beings for answers.

This kit contains the components to assemble one Dexcessa, The Talon of Slaanesh or Synessa, the Voice of Slaanesh.

Find the full list of components to assemble Dexcessa below: 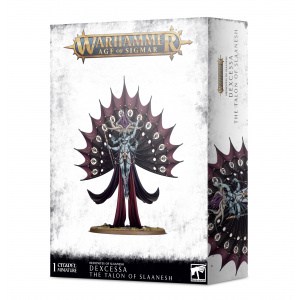 You're viewing: Dexcessa The Talon Of Slaanesh £53.99
Add to basket
We use cookies on our website to give you the most relevant experience by remembering your preferences and repeat visits. By clicking “Accept”, you consent to the use of ALL the cookies.
Cookie settingsACCEPT
Manage consent