Descent: Journeys in the Dark Second Edition is a board game in which one player takes on the role of the treacherous overlord, and up to four other players take on the roles of courageous heroes.

During each game, the heroes embark on quests and venture into dangerous caves, ancient ruins, dark dungeons, and cursed forests to battle monsters, earn riches, and attempt to stop the overlord from carrying out his vile plot.

Featuring double-sided modular board pieces, countless hero and skill combinations, and an immersive story-driven campaign, Descent: Journeys in the Dark Second Edition transports heroes to a vibrant fantasy realm where they must stand together against an ancient evil.

Kevin Wilson’s Descent: Journeys in the Dark has been among Fantasy Flight Games’s most popular titles for nearly ten years, redefining the dungeon-delving genre and setting the gold standard for engrossing gameplay and top-notch components. With the updated second edition, this tradition of excellence continues. While longtime Descent fans will find a new way to enjoy this classic favorite, a new generation of hobby games enthusiasts will be introduced to its engaging tactical gameplay and immersive narrative.

Whether you’re a newcomer or a veteran, you’re sure to appreciate Second Edition’s new heroes and monsters, streamlined rules, class-based hero system, campaign play, and much more. Read on to learn about the specific enhancements Second Edition introduces!

With danger lurking in every shadow, combat is a necessity. When weapons are drawn, Descent: Journeys in the Dark Second Edition uses a unique dice-based system. Players build their dice pools according to their character’s abilities and weapons, and each die in the pool contributes to an attack in different ways. Surges, special symbols that appear on most dice, also let you trigger special effects to make the most of your attacks. And with the horrors that wait underground, you’ll need every advantage you can take…

The dungeons below Terrinoth are crawling with horrible minions of the overlord player, all waiting to put an end your quest. However, not only does the overlord have access to the monsters on the board, but his forces are periodically reinforced. If the heroes don’t stay vigilant, they might find themselves quickly overwhelmed by their foes.

Are you prepared to brave the dungeons and crypts beneath Terrinoth? Gather your party, and stand together against the forces of evil!

Be the first to review “Descent: Journeys in the Dark (2nd Edition)” Cancel reply 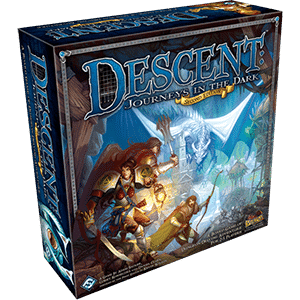 You're viewing: Descent: Journeys in the Dark (2nd Edition) £56.70
Add to basket
We use cookies on our website to give you the most relevant experience by remembering your preferences and repeat visits. By clicking “Accept”, you consent to the use of ALL the cookies.
Cookie settingsACCEPT
Manage consent