This multipart plastic kit contains all the components to assemble The Deathwing Command Squad. The command squads are formation within the Dark Angels Deathwing. They are considered to be the highest-ranking members from the Inner Circle and are often accompanied by Command Squads from the 1st company. These warriors include the most hardened veterans throughout the Deathwing as are well equipped with weapons including the Plasma Cannons and Halberds of Caliban. Specialist members such as the Apothecaries and Company Champions can also make up Command Squads.

Warhammer 40k Dark Angels are known for being the first legion of the Space Marine Legions throughout the 30th Millennium. They are the descendants of primarch Lion El’Jonson who now work together to hunt down The Fallen. These defectors decided to split from the legion after the Horus Heresy, a huge shame the Chapter desperately keeps hidden. Their secret mission is to destroy all off the fallen for their ancient betrayal. Only the inner circle are aware of this ten thousand year old crime and much of their time is given to worship and prayer as they attempt to restore their honour.

We highly recommend using the Citadel Plastic Glue and Paint to assemble and bring your miniatures to life!

Be the first to review “Deathwing Command Squad” Cancel reply 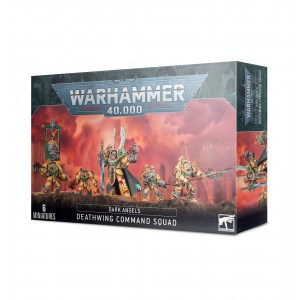 You're viewing: Deathwing Command Squad £27.79
Add to basket
We use cookies on our website to give you the most relevant experience by remembering your preferences and repeat visits. By clicking “Accept”, you consent to the use of ALL the cookies.
Cookie settingsACCEPT
Manage consent