Deathwatch Combat Patrol contains a key selection of 15 Deathwatch units for battles of Warhammer 40k. Specifically chosen for their skills and experience, the Deathwatch are dedicated to hunting down all xenos races.

The Deathwatch are a chapter of Space Marines and considered to be the Imperium’s best weapon against the threats posed by xenos races. From their hidden bases, the Deathwatch will carefully despatch operatives to hunt and exterminate alien presences. These post-human warriors are all veterans of countless battles, the highly skilled xenos-hunters will learn new tactics and strategies so they can slay the alien races. The elite force are equipped with specialist ammunition types, weapons and wargear that has been developed to cut down their enemies. They are black-armoured hunters proudly display their service to the Emperor and will chase after any threat to the Imperium. Filled with rage towards the xenos, they refuse to rest until they are gone for good.

Safeguard the Imperium from xenos threats using this Combat Patrol! These components have all been chosen to provide you with an ideal Deathwatch force for your Combat Patrol sized games. We recommend using the Citadel Colour System to prime your new miniatures ready for all your future battles.

Be the first to review “Deathwatch Combat Patrol” Cancel reply 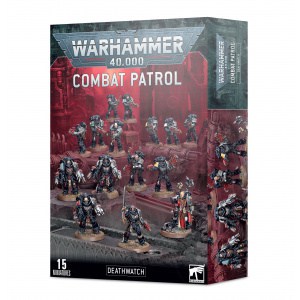 You're viewing: Deathwatch Combat Patrol £67.84
Add to basket
We use cookies on our website to give you the most relevant experience by remembering your preferences and repeat visits. By clicking “Accept”, you consent to the use of ALL the cookies.
Cookie settingsACCEPT
Manage consent