This multi-part plastic kit contains the components to assemble three Deathshroud Bodyguards! Also including the option of different heads and weaponry.

This multi-part plastic kit contains all the components required to assemble three Deathshroud Bodyguard. Covered in rot, decay and tenctacles  each model features Nurgle symbolism which is often found within the rust and chips of their armour. The bodyguards are armed with a large scythe that stands taller than the Deathshroud himself and features a plaguespurter to target the unfortunate. With these miniatures also comes the option of head variants, including both helmeted and bare as well as an extra plaguespurter gauntlet!

The Deathshroud Bodyguard easily tower over their enemies armed with their manreapers, the cursed weapon able to slice heads from shoulders and even limbs from torsos. Surrounding them is clouds of plague, which spills from the vents in their armour and chokes their foes. The Warhammer 40k Death Guard form part of the traitor legions of Chaos Space Marines. Once loyal followers of the Emperor, they were corrupted by their new Plague God Nurgle.  Now they rot away within their power armour and are immune to all injuries.

We highly recommend using the Citadel Plastic Glue and Paints to assemble your three new miniatures. Get creative as painting is a big part of the hobby and discover the incredible range of Citadel paints which have all been designed to suit your Warhammer needs. Once primed and ready, introduce these new miniatures to the endless battles of Warhammer 40k! 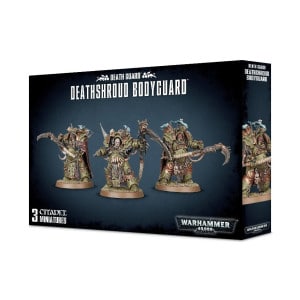 You're viewing: Deathshroud Bodyguard (Death Guard) £27.94
Add to basket
We use cookies on our website to give you the most relevant experience by remembering your preferences and repeat visits. By clicking “Accept”, you consent to the use of ALL the cookies.
Cookie settingsACCEPT
Manage consent