Deathrattle Skeletons are units for Soulblight Gravelords armies which are able to return back from death. This kit contains components to build 20 miniatures in either two separate groups or one large one.

Deathrattle Skeletons are tireless warriors armed with rusting weapons and fitted with fading armour. While they may not be the greatest soldiers, they make up for their weaknesses in numbers. Even when struck down by the enemy they are able to return back from the dead to continue battle by the magic of Shyish.

The long-dead fighters have been disturbed from peace and precious memories as the compulsion to fight and obey completely takes over. The army of Soulblight Gravelords are full of eternally hungry monstrosities forming a part of the Grand Alliance of Death. Using their dark magic they will raise the Deathrattle Skeletions from the dead continuously leaving them with no option but to fight. This may not increase skills as the skeletons suffer from a lack of knowledge, but it will improve numbers and build a stronger force to fulfil the wishes of Nagash.

This kit assembles 20 Deathrattle Skeletons in either one or two groups. Each of these groups have the option to assemble a Standard Bearer and Skeleton Champion with either a mace or halberd.

Bring the dead to life using the Citadel Colour System that consists of a huge range of water-based paints designed for Warhammer miniatures. Choose your preferred method of painting and prepare your spectacular army ready for battles of Warhammer Age of Sigmar! 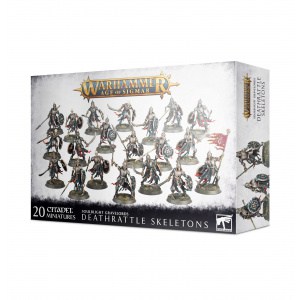 You're viewing: Deathrattle Skeletons (Soulblight Gravelords) £29.21
Add to basket
We use cookies on our website to give you the most relevant experience by remembering your preferences and repeat visits. By clicking “Accept”, you consent to the use of ALL the cookies.
Cookie settingsACCEPT
Manage consent