This multi-part plastic kit contains the components required to assemble seven Plague Marines. Including the Mace of Contagion, Power Fist, Bolt Pistol, Boltguns and so much more!

This multi-part plastic kit includes all the components needed to assemble seven Plague Marines. Each marine is posed with the usual Death Guard features, such as their rotting armour that reveals tentacles, displayed severed heads, backpacks full of diseases and pipework. Included is also an Icon of Despair which gives the option for your unit to feature an Icon Bearer.

The seven models have the option of a range of weapons and heads, with some designed to fit specific models. They are armed with boltguns, plague knives, bubotic axes and so much more to guide them throughout battle. There is an extra plaguesword and power fist for the unit Chamption and a total of 16 head choices.

The number of Plague Marines only continues to grow under the service of Nurgle. They are easily distinguishable for their rotting bodies and the slime that oozes from their armour and boils away their skin. Despite them stinking from decay, these warriors are greatly feared throughout the galaxy.

We highly recommend using the Citadel Colour System and Plastic Glue to assemble your marines. Simply follow the step-by-step rules and they will be ready for the battles of Warhammer 40k! 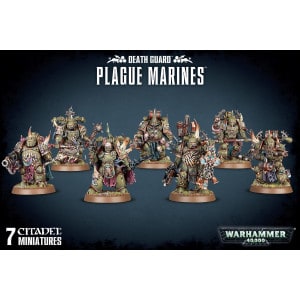 You're viewing: Plague Marines (Death Guard) £23.95
Add to basket
We use cookies on our website to give you the most relevant experience by remembering your preferences and repeat visits. By clicking “Accept”, you consent to the use of ALL the cookies.
Cookie settingsACCEPT
Manage consent