This box set includes a key selection of Death Guard units for your Combat Patrol-sized force! Including 39 plastic miniatures such as the Biologus Putrifier, Plague Marines, Pox Walkers and more!

This 243-piece plastic kit Death Guard Combat Patrol contains the components to assemble the Typhus, Biologus Putrifier, Plague Marines and Pox Walkers models. They are known for being the champions and spreaders of the Plague God, Nurgles gifts. The Death Guard are easy to identify, with pus seeping from their festering wounds, smogs of corrosive gas, tick-leeches clamping on to rotting flesh, billions of plague flies swarming the battlefields and ships used to course through the stars.

Poxwalkers are similar to the cursed zombies, they are a form of the undead infected by Chaos. The cursed victims of Nurgle have been transformed into weapons of the Death Guard and will engulf their enemies in a rotting tide. This set includes 30 Poxwalkers as well as many other miniatures!

Combat Patrol is a small sized game which features this force, making a great way to start your new army. Whether you decide to play an open play game, create a narrative or compete in matched play, this is perfect for you. If this is your first Death Guard army or you want to add to an existing force, this is the ideal box for you! 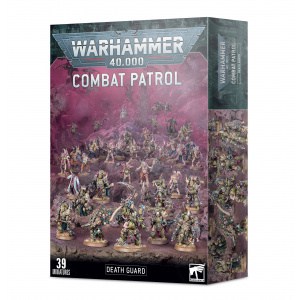 You're viewing: Death Guard Combat Patrol £67.49
Add to basket
We use cookies on our website to give you the most relevant experience by remembering your preferences and repeat visits. By clicking “Accept”, you consent to the use of ALL the cookies.
Cookie settingsACCEPT
Manage consent