This Death Company Intercessors kit contains the necessary components to assemble five Blood Angels. Each are armed with bolt rifles that have three variants of assembly including the standard bolt rifle with sickle magazine, auto bolt rifle with overcharger and box magazine or stalker bolt rifle with longer-range sight and straight magazine. Also included in this kit is a Blood Angels Primaris Upgrade frame that can be used to add the unique heraldry and iconography.

Warhammer 40k Blood Angels are well known for being one of the First Founding Legions of the original Space Marines. They have a feared reputation due to being particularly bloodthirsty during battles. This is because they suffer from a flaw in their geneseed known as the ‘black rage’ which can send the angels into irreversible madness. No cure has been found for this flaw but it can be used wisely during the most desperate fights. As a result of this, the ancient chapter suffers the threat of extinction and now they must gather more numbers to replenish their losses.

We highly recommend using the CItadel Colour System. Get creative and bring these fantastic miniatures to life by choosing from a wide variety of vibrant colours, all designed specifically for Warhammer painting! 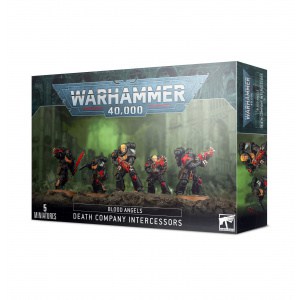 You're viewing: Death Company Intercessors (Blood Angels) £23.37
Add to basket
We use cookies on our website to give you the most relevant experience by remembering your preferences and repeat visits. By clicking “Accept”, you consent to the use of ALL the cookies.
Cookie settingsACCEPT
Manage consent