This multipart plastic kit contains the components to assemble six Dark Reapers. Including their appropriate weapons and bases!

This multipart plastic kit contains all the components required to assemble six Eldar Craftworlds Dark Reapers. They are referred to as the most of all Aspect Warriors and wear armour which is adorned with symbols of both death and destruction.

The Warhammer 40k Eldar Craftworlds are well known for travelling space at sub-light speeds with the Eldar race. Each Craftworld is powered by psychic energy with a similar system to a living creature. Within them live the Aeldari & Ynnari survivors who escaped their grim fate by boarding craftworlds.

Craftworlds were once trading ships housing hundreds of Eldar families, but they now carry the survivors of the Fall. Ynnari are a faction of the Aeldari species who escaped to awaken the God Ynnead, who they believe is capable of defeating Slaanesh. Doing so would completely restore the Aeldari species and all their lost glory. However, the coercion they employ to save their race is also alienating Eldar and many see them as corrupted and dead inside.

We highly recommend using the Citadel Plastic Glue and Colour System to assemble your miniatures and bring them to life!

Be the first to review “Dark Reapers (Eldar)” Cancel reply 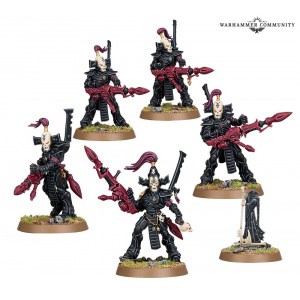 You're viewing: Dark Reapers (Eldar) £27.27
Add to basket
We use cookies on our website to give you the most relevant experience by remembering your preferences and repeat visits. By clicking “Accept”, you consent to the use of ALL the cookies.
Cookie settingsACCEPT
Manage consent