This multipart plastic kit contains the components to assemble 10 Wyches. Feeding upon screams of pain, they have incredible advantages of both speed and technology to aid them throughout battle!

This multipart plastic box set contains 10 Drukhari Wyches,  14 head options and 10 bodies (six female and four male). Also included in this set are all the weapon options that are listed in Dark Eldar Codex such as the razorflail, a blast pistol, a shardnet and more!

The Warhammer 40k Drukhari, also referred to as the Dark Eldar, are an ancient yet highly advanced alien race. The Drukhari do not live on a settled world, instead their population concentrates on the Dark City of Commorragh, making them unique to other races. Consisting of largely pirates and slavers, they will prey on targets all across the galaxy ready to strike without warning.

The Dark Eldar are very well known for their high speed attacks which allow them to travel faster than light. They often take great pleasure on inflicting pain to their foes and will feed on suffering despite their physical beauty. The army have incredible advantages of both speed and technology, however they unfortunately lack in numbers.

We highly recommend using the Citadel Plastic Glue and Paints to assemble and bring your miniatures to life. Get creative and discover the huge range of Citadel Paints all designed to suit your Warhammer needs!

Be the first to review “Wyches (Drukhari)” Cancel reply 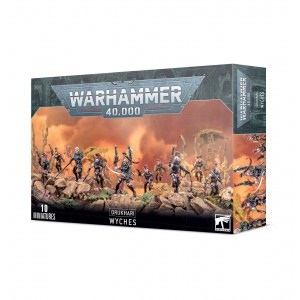 You're viewing: Wyches (Drukhari) £17.97
Add to basket
We use cookies on our website to give you the most relevant experience by remembering your preferences and repeat visits. By clicking “Accept”, you consent to the use of ALL the cookies.
Cookie settingsACCEPT
Manage consent