Introduce a new board game and horde of Titans to your game of Cyclades with this expansion pack. Continue to earn the respect of Gods and fight your way to success while watching out for Kronos!

Cyclades Titans is an expansion pack where 2-6 players aged 13 years or over will storm the map with titans and earn the respect of gods.  This second expansion for Cyclades features a new game board where players can carry out ground attacks.

Tension has now reached a boiling point in Cyclades, and conflict is focused on the two large neighbouring islands. However, with the help of the Gods, six great cities fight for supremacy.
In this expansion we come across Kronos, who has decided to bring a horde of Titans with him, all ready to destroy everything in their path…

Cyclades Titans must include the original Cyclades game to be played.

To gain victory in Cyclades players must respect all the gods as they cannot afford to sacrifice to just one. Each turn consists of players bidding for the favours of the gods, only one player per turn can have the favour of each god.

Players will perform actions bid on the first God such as calling upon mythological creatures, recruiting, building, special actions and increasing revenue. Once every player has replaced their offering marker the round will come to an end. When a player owns two metropolises the game will end and they become winner!

Find the full list of game components for Cyclades Titans below:

Be the first to review “Cyclades Titans” Cancel reply 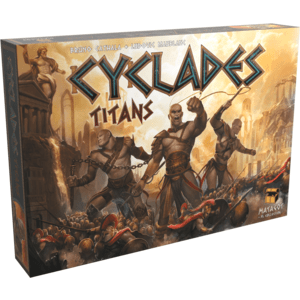 You're viewing: Cyclades Titans £34.35
Add to basket
We use cookies on our website to give you the most relevant experience by remembering your preferences and repeat visits. By clicking “Accept”, you consent to the use of ALL the cookies.
Cookie settingsACCEPT
Manage consent