Gain the favour of Gods and build on ancient Greek islands in this fantasy board game of Cyclades. Compete against players to build two cities and earn support from Mythological Creatures to win the game!

Cyclades is a fantasy board game where 2-5 players aged 13 years or over will control and construct buildings. The board game is set in and around Greek mythology where players must gain the favour of the Gods and build cities on the ancient Greek islands.

Explore different islands and use your soldiers to attack and boost your position. This adventure game comes with multiple abilities and actions to keep the entertainment going until there is one lucky winner. The game will end once a player owns 2 Metropolises and claims victory!

Below is an overview of how to play Cyclades:

Find the game components for Cyclades below:

Be the first to review “Cyclades” Cancel reply 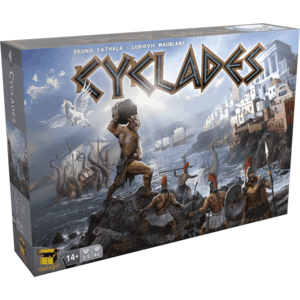 You're viewing: Cyclades £51.70
Add to basket
We use cookies on our website to give you the most relevant experience by remembering your preferences and repeat visits. By clicking “Accept”, you consent to the use of ALL the cookies.
Cookie settingsACCEPT
Manage consent