Assemble your very own Wraithknight with this multi-part plastic kit. Tower over the foe and run through the ruins of shattered cities with this war machine capable of bringing oblivion to enemies of the Aeldari!

This multi-part plastic kit contains all the components to assemble one Eldar Craftworlds Wraithknight. The enormous model dominates the tabletop as it stand at 9″ tall. This kit also includes a variety of arnaments such as the wraithcannon, scattershiels, ghostglaive and suncannon. Decide which weapons you would like, where to put them and also whether your miniature has closed and open fists.

The Craftworld Aeldari Ghost Warrior combat walker looks down on his foes while armed with either directed energy cannons or the Ghostglaive and Scattershield ready for melee combat. Unleash blazing destruction and even charge into foes to cut them apart with this incredible model. Inside of it’s wraithbone hull is where the living pilot communes with their twins soul, for example, this Ghost Warrior can be driven by one living Asuryani and one dead. These are not your normal steersmen like those at the helm of Aeldari grav-tanks, but rather rare warriors who were born a twin.

We highly recommend using the Citadel Glue and Paints to assemble and bring your new Eldar Craftworlds army to life. Choose from the selection of incredible Citadel Paints all deigned for Warhammer Painting and unleash your creativity!

Be the first to review “Wraithknight (Eldar Craftworlds)” Cancel reply 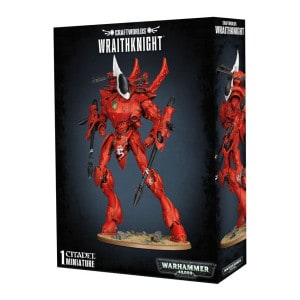 You're viewing: Wraithknight (Eldar Craftworlds) £67.49
Add to basket
We use cookies on our website to give you the most relevant experience by remembering your preferences and repeat visits. By clicking “Accept”, you consent to the use of ALL the cookies.
Cookie settingsACCEPT
Manage consent