This kit contains 42 components to assemble either five Aeldari Dire Avengers or four with one Exarch. Including Head Options, Shuriken Catapults, Aeldari Transfer Sheet and more!

The multipart plastic kit contains the components to assemble five Aeldari Dire Avengers or four with one Exarch. All miniatures in this kit are armed with the Avenger Shuriken Catapults, also including extra parts for them all to be equipped with ammunition pouches. The Exarch who can be armed with the Shuriken Catapults, a Diresword and a Shuriken Pistol using the extra parts. If you want to change it again there is also a Power Weapon and Shimmershield which can be used. Also included in this kit is the choice of two Exarch heads with one helmeted and one bare. Miniatures are also able to feature an optional back banner to help distinguish the unit’s leader and a small statue of Asurmen.

Dire Avengers were the first members of the Aspect Warriors of the Aeldari. These miniatures represent War God Khaela Mencha Khaine as the noblest yet merciless of all warriors. They will show no mercy to their foes and are extremely devoted to their people. They are the most common of the Warrior Aspects as well as being the least specialised and most tactically flexible.

We highly recommend using the Citadel Plastic Glue and Colour System for bringing your miniatures to life! 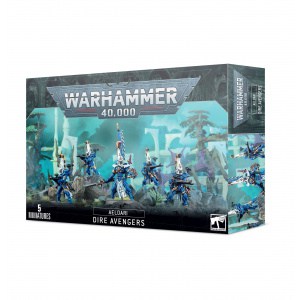 You're viewing: Dire Avengers (Eldar Craftworlds) £18.70
Add to basket
We use cookies on our website to give you the most relevant experience by remembering your preferences and repeat visits. By clicking “Accept”, you consent to the use of ALL the cookies.
Cookie settingsACCEPT
Manage consent