This multipart plastic kit contains the components to assemble three Windriders. Including the Shuriken Catapults, Cannons, Lasers and more!

This multi-part plastic kit contains all the components necessary to assemble three Aeldari Windriders. Armed with jetbikes featuring an array of sensors, these miniatures have incredible textural details to paint and the option of an elevated HUD to prepare them for an attack run. Swooping and arcing throughout the skies at unbelievable speeds all while turning at impossible angles, the Windriders are always completely in tune with their machines. With sudden and vilent strikes, they will often destroy their prey before their antigravitic engines get chance to broadcast their presence.

The Jetbikes are sleek and powerful anti-gravitic motors that has been beautifully designed. Using subtle manipulation of the anti-gravity field, they combine high speeds with incredible maneuverability. They are capable of such velocity that without quick reaction speeds of the Aeldari it would actually be more lethal to the rider than the foe.

Warhammer 40k Eldar Craftworlds are well known for travelling through space at sub-light speeds, carrying the Eldar race. Each Craftworld has a similar system to a living creature but is independent and powered by psychic energy. Within these live the Aeldari & Ynnari survivors who foresaw their grim fate and escaped aboard craftworlds.

Be the first to review “Windriders (Eldar Craftworlds)” Cancel reply 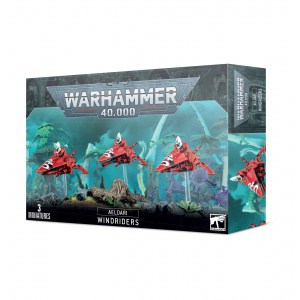 You're viewing: Windriders (Eldar Craftworlds) £25.32
Add to basket
We use cookies on our website to give you the most relevant experience by remembering your preferences and repeat visits. By clicking “Accept”, you consent to the use of ALL the cookies.
Cookie settingsACCEPT
Manage consent