Oversee the fate of the alien species in this 42nd Anniversary Edition of Cosmic Encounter. Build a galactic empire and control the universe with your own unique powers!

Gather 3-5 players aged 14 and over to play Cosmic Encounter Revised Edition and form colonies on five different planets. Each player chooses to play as one alien which has their own unique power. The alien card will provide you with a description of your power, whether it is optional to use, what phase it can be played in and how to use it. The complex game includes over 50 different species to choose from, so every game will be different.

Cosmic Encounter Revised Edition has new spaceships and a freshly revised rulebook, so it is easier to learn. Become the leader of your own alien species and launch your own spaceships through the hyperspace gate. If you are lucky enough to establish five colonies in other player’s planets, you will become the winner!

Here is how to play Cosmic Encounter: 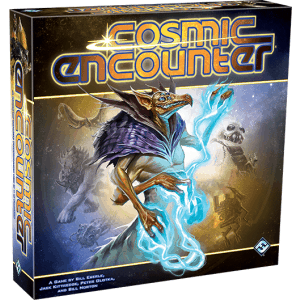 You're viewing: Cosmic Encounter Revised Edition £45.40
Add to basket
We use cookies on our website to give you the most relevant experience by remembering your preferences and repeat visits. By clicking “Accept”, you consent to the use of ALL the cookies.
Cookie settingsACCEPT
Manage consent